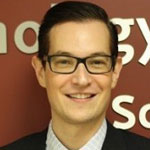 Trevor Hart works to develop and test sex-positive, anti-oppressive HIV prevention interventions and psychotherapies for gay, bisexual and other men who have sex with men. His work is both community-based and clinical and relies on a health promotion framework.

Trevor Hart is a Professor of Psychology at Ryerson University where he leads the HIV Prevention Laboratory. He is a member of the OHTN Board and a Universities without Walls contributor. He works collaboratively with other OHTN research leaders in gay men’s health including Director of Prevention Research, Barry Adam, and Applied HIV Research Chair, David Brennan.