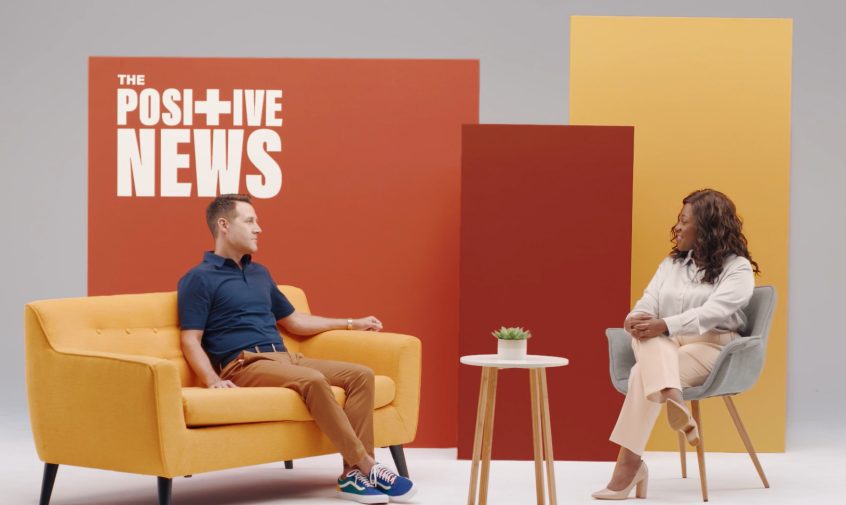 TORONTO, November 30, 2021: Over the past several decades, significant advancements have been made to HIV management, prevention and treatment. From HIV self-testing kits to PrEP (or pre-exposure prophylaxis)—a pill taken once a day to prevent HIV, people living with and at increased risk of HIV can get treatment sooner and live long, healthy lives.

Throughout November, leading up to World AIDS Day on December 1, the Ontario HIV Treatment Network (OHTN) has been rolling out Positive News—a series of interview segments on cable television that run through early 2022, including CP24, Global, Citytv, CHCH, CTV and CBC, that highlight the many positive advancements in HIV testing and care, and the better health outcomes that result. A website has launched, featuring video interviews, as well as important statistics and links to resources.

“The purpose of the campaign is to change the narrative about HIV,” explains Jean Bacon, Executive Director of OHTN. “Often, when people think about HIV, they still recall images from the 1980s and 90s. They aren’t aware of the advances in HIV prevention, testing and treatment. We want them to know that people with HIV are now leading long, healthy lives and that, when they are on treatment and virally suppressed, the virus can’t be passed on.”

Positive News is hosted in English by former OHTN employee, Muluba Habanyama, a Toronto-based HIV advocate and communications specialist, who herself has made significant inroads in challenging stigma by publicly sharing her story of living with HIV. A French version—”Nouvelles Positives”—is hosted by Eno Akan-Essien, an HIV advocate and support worker with Peel Region’s Moyo Community Services.

Through interviews with experts and community leaders, Muluba and Eno draw out important anti-stigma messages. The campaign also illustrates how it’s easier and more flexible than ever to get tested for HIV. Testing is free and confidential in Ontario, and there are a variety of options available, including physician testing, rapid point-of-care testing, and home self-testing kits. The campaign also discusses PrEP, how to access it in Ontario and how it’s helping the fight against HIV infections.

Bacon characterizes the campaign as sharing, “upbeat, accessible and evidence-informed content; promoting important resources like HIV self-testing kits; and amplifying key anti-stigma messages like ‘Undetectable Equals Untransmittable.’” She explains that, “the campaign hopes to reach members of populations in Ontario that have higher rates of HIV, like gay, bi and queer men who have sex with men; trans individuals; African, Caribbean and Black men and women; and Indigenous communities.”

Ultimately, the campaign aims to reduce fear and stigma associated with HIV and encourage uptake of effective prevention options, regular testing and treatment, and improve the physical and mental health of those at-risk or living with HIV.

“Over the last thirty years there have been some very important discoveries related to HIV prevention and treatment,” explains Dr. Isaac Bogoch, Infectious Disease Expert and Associate Professor at University of Toronto. “The Positive News campaign is spreading awareness of advancements like PrEP and PEP and helping individuals at increased risk of infection understand how to access these treatments.”

So far, there has been excellent engagement with the Positive News campaign online, including a high clickthrough rate from social media posts to the website. This indicates significant interest among viewers in learning more about HIV testing, treatment and prevention. A second phase of the campaign will launch in 2022 and include live interviews, as well as new content, statistics, and resources.

“Stigma around HIV is still prevalent in some Ontario communities, which only helps to spread the virus,” explains Ky’okusinga Kirunga, Director at African Caribbean Council on HIV/AIDS in Ontario. “By helping to reduce fear and encouraging people who are at increased risk to ‘know their status,’ the Positive News Campaign will hopefully compel more Ontarians to get tested and start treatment early, if their results come back positive.”

The Ontario HIV Treatment Network (OHTN) is a non-profit network funded by the Ontario Ministry of Health. Our mission is to improve the health and lives of people living with and at risk of HIV by using data and evidence to drive change. The OHTN works collaboratively with our partners to gather and analyze data, conduct targeted high-impact research and support the use of the best available data and research evidence.