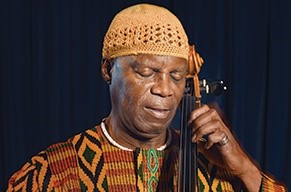 Robert Bardson, co-chair of the Canadian HIV/AIDS Black African and Caribbean Network (CHABAC) passed away.earlier this month. Robert was a long-time HIV survivor and a powerful voice describing the challenges of aging with HIV. He was also a talented musician who used his gifts  to share joy and to build empathy and understanding for and between people living with HIV.

A statement from the CHABAC Steering Committee described Robert as “a steadfast advocate who held many issues near to his heart. He fought against racism, homophobia and stigma related to HIV, mental health and ageing…While many of us knew Robert for his role on CHABAC, CPPN or one of the many other groups he was committed to, he was also a gifted cellist and cello teacher, and an avid promoter of using the arts in community-based work.” This brief video tribute from some of Robert’s students explores his legacy as a professional musician and teacher.

In 2012, Robert created the performance work “Music and Musings from the Life of a 27-Year Survivor,” a mix of music and personal anecdotes that he first performed at the 2012 International AIDS Conference in Washington, D.C. Subsequent works, including “New Age for the Aging” performed at the OHTN Back to Basics conference, continued to highlight the particular challenges of living through the devastation of the early AIDS years and the continuing dislocations of aging and exclusion.

“There is an intrinsic penchant for hopelessness in this age group that requires, and is only relieved by, the empathy of the entire PHA community,” Bardson said, in a Positive Side interview in 2014. “This generation of long-term survivors needs the acceptance and protection of society to accept and protect itself.”