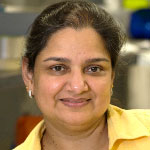 Women are more vulnerable to sexual transmitted infections than men. Charu Kaushic and her research team work to understand the environment of the female genital tract and the mucosal immune system in the reproductive tract. The team’s efforts focus on creating barriers to HIV transmission during heterosexual sex by understanding these biological factors.

Charu Kaushic is a Professor of Pathology and Molecular Medicine at McMaster University. She has a strong research partnership with Women’s Health in Women’s Hands, and both this community-based organization and the African and Caribbean Council on HIV/AIDS in Ontario have collaborated with her team to help shape her research agenda. Charu also collaborates extensively with Rupert Kaul, another OHTN funded scientist, whose work focused on similar mucosal tissues, particularly in the gut and rectum.